Kasia Pietrzko – Polish pianist, arranger and composer. Student of the Academy of Music in Krakow, graduate of the State Music School Complex in Bielsko-Biała. She participated in music workshops run by renowned artists, including Ed Cherry, Kenny Garrett, Eric Marienthal and Chuck Israels. She honed her skills in New York with Aaron Parks, Taylor Eigsti, Johnny O’Neal, Aaron Goldberg and Kenny Werner. To date, the artist recorded albums in collaboration with Joanna Słowińska and Sinfonietta Cracovia as one of the authors of Zielnik Polski, recorded at the Krzysztof Penderecki European Music Centre in Lusławice; she has also co-authored the debut album of Stanisław Słowiński Quintet. In 2016, the artist released a demo announcing her debut album Kasia Pietrzko Trio.

In 2015, together with her Kasia Pietrzko Trio, she performed at the 42nd International Jazz Pianists Festival in Kalisz. In December 2015, together with the Stanisław Słowiński Quintet, she won the Grand Prix of the 39th Jazz Juniors International Contest of Young Jazz Bands in Krakow. In September 2017, Kasia Pietrzko Trio’s debut album Forthright Stories was released, garnering positive reviews of jazz critics and other musicians. Since 2017, the artist has been a part of the Tonny Williams Tribute, led by an outstanding drummer Michał Miśkiewicz. She also collaborated with Adam Larson, Troy Roberts, Henryk Miśkiewicz, Mateusz Smoczyński and Adam Bałdach. She has performed at festivals in Spain, Serbia, Romania, Slovakia, Czechia, Hungary and China.

On 14 February 2018, she played her first concert with Tomasz Stańko in the Alchemia Club in Krakow. She is nominated for the 2018 Fryderyk Award in the DEBUT OF THE YEAR category, and Jazz Forum monthly has dubbed her the second New Hope. Many outstanding Polish jazz musicians believe in her knack for improvisation, harmonic imagination and creativity with sounds.

Andrzej Święs – the leading double bass player of the young generation of the Polish jazz scene, graduate of the double bass class at the I.J. Paderewski Academy of Music in Poznań (2005) and the Institute of Jazz and Popular Music at the Karol Szymanowski Academy of Music in Katowice (2008). He made his debut on the jazz scene in 2004, performing with Paweł Tomaszewski’s trio at the Jazz Juniors International Contest of Young Jazz Bands in Krakow, where the band won the second prize. He regularly works with Soundcheck and Grzegorz Nagórski’s quartet. In his artistic work, he collaborated with numerous prominent artists, including: Lee Konitz, Janusz Muniak, Jan “Ptaszyn” Wróblewski, Adam Pierończyk, Piotr Baron, Joachim Mencel, Ewa Bem, Leszek Żądło, Wojciech Groborz, Arek Skolik, Łukasz Żyta, Grzegorz Piotrowski, Tomasz Grzegorski, Marcin Ślusarczyk, Zbigniew Namysłowski.

Piotr Budniak – drummer and composer from Zielona Góra. raduate of two music academies – in Katowice and Krakow. Winner of the majority of the most important Polish jazz competitions, with significant successes on the European scene. He played concerts in China, South Korea, Estonia, Spain, Romania, Russia, France, Belgium, Slovakia, Czechia, Germany, Hungary and Ukraine. From a very young age, he has been aware of pluralism and the resulting relativity of reality. He has always been internally conflicted, seeking a balance between heart, mind and spirit. Always addicted to doubts and asking difficult questions, to which he does not accept simple answers. Fascinated by the linear concept of playing the drums and the translation of melody into rhythmic matter. Constantly looking for new inspirations and means of expression. He is a musician in numerous young generation jazz bands (including Adam Jarzmik Quintet, Kasia Pietrzko Trio, The Forest Tuner, Klara Cloud & The Vultures). He is also a leader of his own band – Piotr Budniak Essential Group. He also played with Janusz Muniak, Zbigniew Namysłowski, Piotr Wojtasik and Piotr Wyleżoł.

The concert is part of the tour promoting the album Just ignore it.

The projects created by the Możdżer Danielsson Fresco are always unique and surprising. Music lovers appreciate their productions for their subtle and refined sound, as well as for achieving harmony between improvisation, which is a crucial element of jazz, and melodic accessibility. The trio has released three studio albums: The Time, which has since turned platinum, as well as Between Us and the Light and Polska, which achieved double platinum status. This time around, the musicians invited the Holland Baroque orchestra, with whom Leszek Możdżer recorded his Earth Particles album in 2017.

Leszek Możdżer – an outstanding pianist and composer, who ushered in a mental and stylistic revolution in Polish jazz – something, which has been never done before by any other jazz musician. He dressed difficult jazz phrases, complex improvisations, the melodics of jazz standards and the subtlety of his compositions in the shroud of his peculiar jazz music, which – without pandering to listeners and appealing to labels and hit list creators – became “Leszek Możdżer’s jazz”, characterised by vibrant expression. He is one of the most interesting phenomena of Polish jazz in recent decades. Initially associated with the yass Miłość band, he later joined a number of bands and groups, including bands led by Zbigniew Namysłowski, Tomasz Stańko, Buddy de Franco, Archie Shepp and many others. The pianist’s discography encompasses more than a hundred albums. He has recorded and performed with David Gilmour, Nana Vasconcelos, Marcus Miller, John Scofield, Joe Lovano, Tan Dune, Pat Metheny and Adam Makowicz. His album Impressions On Chopin has already become a staple of the canon of recordings inspired by the work of the brilliant Polish composer. Leszek Możdżer also worked with Jan A.P. Kaczmarek (recordings for the Academy Award-winning soundtrack for Finding Neverland). His solo projects (Piano, Komeda), as well as those carried out in a trio with Lars Danielsson and Zohar Fresco (The Time, Between us and the light, Polska) achieved the Diamond and Double Platinum Record status. He also composed music for theatre plays and films.

Lars Danielsson was born in 1958 in Sweden. He graduated from the double bass, cello and bass guitar classes at the Gothenburg Conservatory. His lyrical, yet strong and rhythmic style made him famous on the international jazz scene. The ability to make even the most ordinary melody sound fresh is the reason why Lars Danielsson has participated in a huge number of music constellations around the world.  The Lars Danielsson Quartet with saxophonist Miles Davis, David Liebman, pianist Bobo Stenson and legendary percussionist Jon Christensen has gained great critical acclaim and has collected all possible accolades in 20 years of activity. This band was a kind of a playground for Lars, where he could develop his enormous potential towards arrangements and compositions. As a composer, Lars Danielsson wrote music for a quartet, symphony orchestra and a big band, he also headed the star-studded Jazz Baltica Orchestra.  Lars’ discography includes eight original albums, which he published since 1980, collaborating with various artists, such as as: John Abercombie, Bill Evans, Michael Brecker, John Scofield, Jack DeJohnette, Mike Stern, Billy Hart, Pat Metheny and Charles Lloyd. Lars Danielsson was also a member of Trilok Gurtu Group. As a producer, Lars works with Cecilie Norby, Jonas Johannes and Viktoria Tolstoy.

Zohar Fresco was born in Israel in 1969 into a family with Turkish roots. He started playing percussion instruments at the age of six. As a teenager, he took a deep interest in traditional Arabic instruments such as hoop drums and tambourines.  Over time, his development and characteristic playing style have made him a drummer known not only in his home country but also on the international stage. He took part in the soundtrack recordings for such films as Kikar Hahalomot, The Fifth Element, and The Beautiful Country. Zohar Fresco is also the artistic manager of the Peimot Percussion Festival, which takes place once a year in Jerusalem. He runs music workshops and travels around the world, presenting them to new audiences. He also takes part in countless diverse music projects. 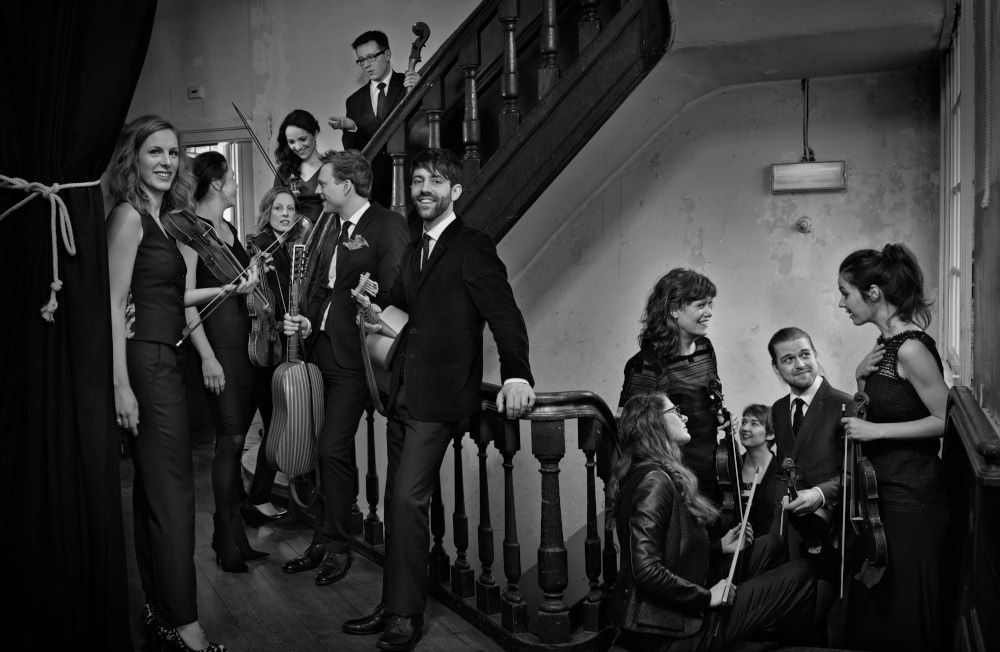 Holland Baroque has gained worldwide recognition for its unique, fresh approach to historical music and beautiful sound. The band’s concerts exude a special kind of energy, resulting from the inspiring relations between the artists, as well as their engagement in the music they perform. They do not shy away from sound experiments with folk, contemporary, popular and jazz music. The Holland Baroque Society does not have a regular director or head. Instead, the orchestra has an artistic board of directors consisting of its four founders: Esther van der Eijk, Judith Steenbrink, Lidewij van der Voort and Tineke Steenbrink.